share to:
更新时间:2018年06月07日12:06:04 【 打印此页 】 【 关闭 】 Hits: 1885 Updated: June 7, 2018 12:06:04 【 Print this page 】 【 Close 】
With the development of social economy and the continuous acceleration of urbanization, the urbanized area and the underlying conditions of urban areas have changed greatly. Under the same amount of rainfall conditions, because the impervious area is added, the runoff coefficient is increased, and the output flow is also increased accordingly.The flood peak flow is increased, and the peak time is earlier, which not only brings a great burden to downstream flood prevention and drainage, but also may As a result, the drainage of rain in some areas is not smooth, and the phenomenon of stagnant water has brought great inconvenience to people's lives. In addition, the precious rainwater resources have not been fully used because the rainwater is discharged. Therefore, many cities have adopted rainwater flooding methods, such as building cisterns, laying permeable bricks , and choosing concave oasis. In order to make better use of these rain flood methods, it is necessary to discuss them in terms of flood prevention and increased use of rain resources. The author used the Urban Storm and Rainwater Management Model (SWMM) to calculate and analyze the changes in the flood peak flow of the main section of the drainage pipe under the two methods of laying permeable bricks in a certain area of Beijing and choosing a recessed oasis.
1 SWMM model overview
SWMM is a comprehensive mathematical model developed by the US Environmental Protection Agency in order to plan and handle urban rainstorms. It can mimic a complete urban rainfall runoff process, including the process of rainwater regulation in ground runoff and drainage systems. The SWMM module includes the primary modules such as a runoff module, a transport module, an extended transport module, a storage / processing module, and a receiving water body. The output of the model can show the current and water quality conditions at various points in the system and in the receiving water body.
① Generalization of sub-basin
In the SWMM model, a watershed is generally divided into several sub-watersheds, and the runoff process is calculated separately according to the characteristics of each sub-watershed. Finally, the outflow of each sub-watershed is superimposed through a flow calculation method. In order to reflect different surface characteristics, each drainage area is further divided into three parts: a. Impervious surface A1 with depressions; b. Impervious surface A2 without depressions; c. Permeable surface A3.
② Surface runoff accounting
Rainfall loss on impervious surfaces without depressions is the initial transpiration; rainfall loss on impervious surfaces with depressions is primarily depressions. With regard to the impermeable surface, there is no runoff when the initial damage is not satisfactory, and once the initial damage is satisfied, the full flow will be produced. As for the pervious surface, in addition to the loss of filling, there is also the loss of infiltration. SWMM uses Horton model, Green-Ampt model and SCS model to calculate infiltration loss.
③ Calculation of surface confluence
The converging process refers to collecting the net rain from each sub-region to the exit control section or directly discharging into the river. Non-linear reservoir model is selected for surface confluence simulation, which is solved by successive equations and Manning equations simultaneously. The model needs to input the area of the study area, the width of the drainage area, the Manning roughness of three different types of surface, the stagnant volume of the surface with stagnant volume, and the slope of the entire drainage area.
④ Calculation of Convergence Subsystem of Pipe Network
The calculation of the pipe network sub-system can be calculated in the SWMM model through the transport module or the extended transport module. They all use the method of solving Saint-Venant equations. The role of the cistern in the SWMM model is to store rainwater runoff from rainfall and then reduce the amount of rainwater entering the pipe network. In the discussion, permeable bricks were laid in some areas. When the rainfall intensity was less than the infiltration rate, the rainfall did not produce runoff; when the rainfall intensity was greater than the infiltration rate, the runoff was calculated using the Manning formula. Regarding the cisterns on different sub-confluence units, the runoff after the rainfall is satisfied and the initial loss first enters the cistern. When the cistern is full of water, the excess part enters the drainage pipe network.
⑤ Use process of SWMM model
a. Carefully study the area where the rainstorm is simulated, and divide the entire drainage area into several independent drainage pieces according to the laying of the pipeline. b. According to the laying of pipelines and the control area of other equipment, each drainage piece is subdivided into several sub-watersheds, and all sub-watersheds are numbered. c. Find the sub-catchment area and determine the parameters of all models. d. Data entry. e. Calculate the flood peak flow, total runoff and flow progress of each planning section, and analyze it reasonably.
2 Use of models
2.1 Discussion on the generalization of regional drainage system
In this model, the west campus of Beijing University of Technology was selected as the research target, with an area of 2.87 × 104m 2. In the meantime, the impervious area is 0.99 × 104m 2, accounting for 34.5% of the total area; the permeable area is 1.88 × 104m 2, accounting for 65.5% of the total area.

The distribution status is shown in Figure 1. According to the use of SWMM, this area needs to be reasonably generalized, and a simple rainwater pipe network is planned to be built, and the rainwater will be separated into the municipal drainage pipe network. The entire imitation community is divided into 17 drainage communities, with 14 nodes, 13 pipes, and 1 water outlet. 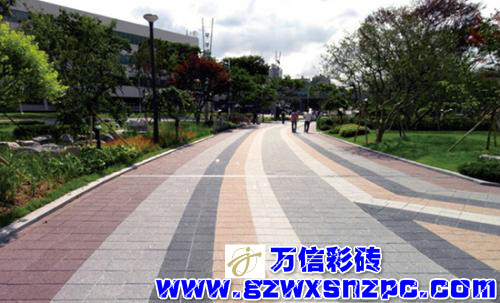