Can permeable bricks be laid on hardened pavements?

Guangzhou, a coastal city, has frequent rains during the dry season. Once there is heavy rainfall, many major streets will be out of the ocean. No one will forget the heavy rain in Guangzhou in 2012. People can go out on the street to drive motor boats. Speaking of reasons, most people attribute it to the small planning load of the drainage pipe network. As everyone knows, hardening of the road surface is also one of the important reasons. At present, the hardening and laying of driveways and sidewalks in cities is becoming more and more common. Unfortunately, the problem of water permeability on roads is often overlooked. In order to prevent the accumulation of water on the road, not to spoil the precipitation, and to supplement the groundwater, can the pavement be hardened? 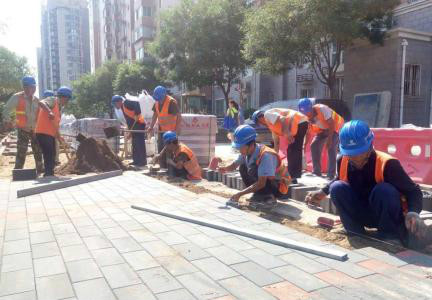 彩砖这样不透水路面，包含人行道、自行车道、露天停车场、院子及公共广场等。 In urban construction in recent years, most cities like to choose impermeable pavements such as regular and beautiful colored concrete tiles , including sidewalks, bicycle lanes, outdoor parking lots, yards, and public squares. Although the pavement hardening is well-organized, its biggest flaw is that it is impervious, so the replenishment of groundwater by precipitation is completely blocked. In cities that use groundwater as a source of drinking water, the falling groundwater level is difficult to rise. Rainwater is lost or evaporated from the pavement, making the city dry and dry on the ground, exacerbating dust pollution in the city, and bringing great difficulties to urban greening due to the dryness of the ground. When it rains heavily, rainwater secretes poorly and accumulates on the road, causing traffic jams, and then exacerbating the pollution of motor vehicle exhaust emissions. On the other hand, when the rainwater crossflows, it will incorporate a large number of urban pollutants, such as heavy metals and carbon in automobile exhaust emissions. Hydrogen compounds, tire wear, daily waste, dust and chemicals on construction sites, pesticides sprayed on urban grasslands, and more.

Pavement hardening attracts, stores, and reflects the heat of the sun, causing the average ground temperature to rise significantly. Meteorologists said that this greatly increased the heat of summer in the city, and together increased the energy consumption paid for artificial cooling in the city. Hardened pavements also cause many environmental and ecological negative effects, such as reducing air communication and air humidity on the pavement, combined with increasing air pollution in cities, which contributes to the formation of urban heat island effects.