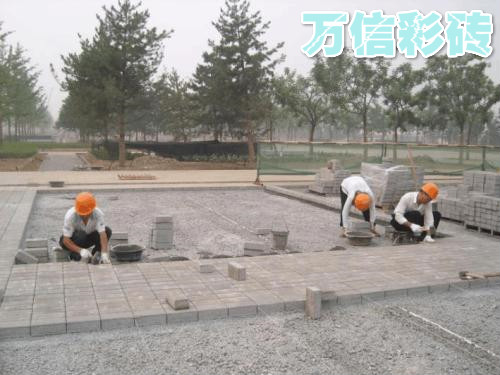 铺设的路面不仅仅是路面材料本身的问题，还有路基、收集进入水的系统和一系列相关技术的支撑。 The pavement paved with permeable bricks is not only a matter of the pavement material itself, but also the support of the subgrade, the system that collects the incoming water, and a series of related technologies. But now, our technical level can't meet such requirements.

Because the permeable brick has excellent air-permeable and water-permeable functions, the new type of permeable brick is more effective in penetrating moisture and reaching the role of dispatching humidity. Permeable bricks are laid in the city, as if the aerobic breathing of the city is increased, and the entire air becomes more fresh and natural. In durable past, the streets, squares and courtyards of residential quarters in the city were mostly paved with granite, cement, glazed tiles and other materials.

Therefore, almost all cities face the same embarrassment. On the one hand, a lot of hardened ground constitutes urban rainwater that cannot penetrate into the ground, and the groundwater level drops because it cannot be compensated by rainwater; on the other hand, the hardened surface water on the road surface in rainy days gives pedestrians And inconvenience caused by transportation, and even waterlogging due to incomplete urban drainage equipment. The occurrence of a new type of permeable brick can absorb surface water sensitively. After the brick body is soaked, water moves in the open space between the bricks and eventually flows into the underground drainage pipe. If permeable bricks are laid on the streets of the city, even in heavy rainfall, the municipal drainage capacity can be reduced and water on the road area can be avoided.